Music to write by… 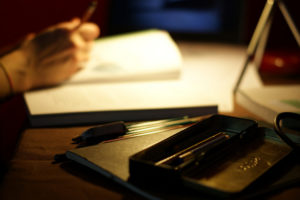 I’ve used music all my life for my creative endeavors. When I was in design school and CD’s were the way to play, I’d keep a huge, teetering stack next to my drafting table. My tastes, as they still are, were all over the place but mostly I used the music to help shift my mood–wake me up, calm me down, keep my focus.

What’s different now is that I use music to evoke tone of scene, character, and dialogue. For instance, when Patience is contemplative I’ll probably listen to something like Explosions in the Sky or Jon Hopkins. When I’m trying to capture the way New Orleans feels to me, I might listen to local music–maybe the Revivalists or even Louis Armstrong or the Nevilles. When she’s moving around in her day I might choose something with a beat that’s not too “noisy” like Phantogram, Glass Animals, Little Dragon or Tycho. When I’m writing sex scenes it’s a very specific musical experience. Is the music rough, aggressive, or tense? That might land me in some nasty hip-hop or FKA Twigs. If the love scene is slow and sensual I might choose Emika or Vaults. Erotic and passionate scenes might call for Mychael Danna, Peter Gabriel (from the Soundtrack the Passion) or other soundtracks that have steamy scenes.

I wrote almost the entirety of “Artist’s Touch” listening to Led Zeppelin. For one, the artist is older than Patience and his tastes run to traditional rock and he’s playing it while he seduces her. I wanted to write to the tempo of the music she was hearing as she was experiencing the foreplay and the release. I think it’s fairly effective and maybe will want you to go put on “When the Levee Breaks” and listen with new ears.

One of my favorite scenes from Underpinnings is Lattimer Library. I began building tension when Daniel told Patience to meet him there. I used the music to help me express the strain of waiting that she felt as the streetcar rolled toward her destination. She was turned on, excited and also had no idea what they would do there. As a young woman who’s just exploring all these feelings,  I thought it was important for the reader to be there with her, so to speak. As if it were the first time for all of us. As we move into adulthood and partner up, we forget how incredible the first time doing anything with someone feels. The way they laid a hand over ours, the way their lips landed on ours before we ever knew how they tasted, the way their skin smelled before we’d ever been that close. The “first times” are to be treasured, catalogued, held dear because we never get them again. Of course, the irony of all this is that Patience is herself anxious to do it all, and quickly! Only the reader can watch her from the distance of a page and the miles of experience and realize how special the moments are.